There will also be a nod to the overly ambitious #38:

‘Write or edit one short story a week’

#13, #45 and #52 are somewhat interchangeable since they all involve taking time out of my day to read. #52 involves slightly more effort, as I don’t yet own all the Sandman books. In fact, I only have the first four – but I started ‘War and Peace yesterday, so I think I can hold off worrying about those until I’ve worked my way through all 1,000 pages of Tolstoy’s masterpiece. (Is it a masterpiece? I don’t know – I’m only 100 pages in.) 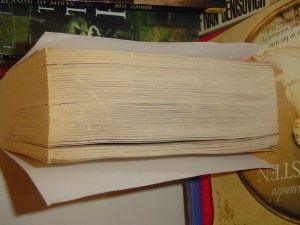 Only 100 pages in… thank goodness the book is split into, uh, books.

To clarify #45 slightly; the books I still have to read are not actually on my shelves, though I don’t doubt that there are a couple there that also need to be read or finished. The 81 books (now less) in question were instead stored in two boxes in the messy nook that CM and I call ‘The Study’. The full story of where they came from can be found in an earlier blog entry. There’s only about five entries overall, so I’m not going to give the title. It’s pretty obvious.

The books only earn a place on the shelf once they’ve been read. Some of them will be earning places in secondhand shops because, John Grisham, your golden years are over: ‘The Testament’ made me want to severely assault you with its over-sized, wasted pages. The rule of the boxes is that I have to read all the books, no matter how bad. Recently, the two boxes became one very carefully packed box. It made me feel a bit better, as I have sworn off buying books, except in situations of extreme neediness or where there is list involvement, until they’re all finished.

CM bought me the copy of ‘War and Peace’ which was very sweet of him, especially since he now has to listen to me whinging about how I get the characters mixed up. Probably I’m just stupid, but the cultural difference in writing whereby characters in Russian novels go by five different names each really throws me. The upside to Tolstoy is his tendency to assign a particular characteristic to each character and refer to it frequently. Whenever I lose track of who I’m reading about, the mention of a ‘short downy lip’, ‘ironical look’ or ‘beautiful, wistful eyes’ will clarify the situation for me.

In a twist of fate calculated to draw my attention away from ‘War and Peace’, the paperback edition of ‘The Girl Who Kicked the Hornets’ Nest’ arrived this morning, courtesy of CM’s parents (thank you!). It counts as an unread, right? 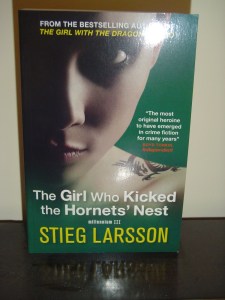 #13, #45 and #52 go some way towards putting of #38. That was a badly phrased list option, so I hereby officially change it to ‘Write and edit 30 short stories’, because one a week is… just never going to happen. I ought to be writing one now, for The Campaign for Real Fear competition. I also ought to be writing a script (#6). I signed up for Script Frenzy this year. It started two days ago, and so far I have no plot, no ideas and not even a title page. I have had a lot of fun playing with the formatting functions in Final Draft, though. Pah. Procrastination.