Yesterday I signed up for the Edinburgh half-marathon. I often tell people that I do well with deadlines, and I really do. I need the pressure to get me going in all areas of life, from writing to exercise to… well, spending time with people even. Otherwise I just lie around stagnant, like water in a pipe waiting for the tap to be turned on, probably growing mould and smelling a bit funny.

The pressure works really well. I get motivated and creative and I DO stuff. And then I get carried away and sometimes I accidentally put a bit too much pressure on myself and water-me sort of blurts out everywhere in panic, and lands up as a useless puddle on the sideboard, waiting to be wiped up.

That’s a terrible description, but you get my point. And that point is… well, I think I’ve probably hit my pre-puddle limit by adding half-marathon training to my life. I signed up because I need to move more and I miss running – but as Not A Natural Runner, I need a reason to do it. Unfortunately I don’t love myself enough for ‘the extra energy and muscles and sense of well-being’ to be reason enough. I also need the promise of a medal, and self-loathing if I don’t at least attempt to train.

So, what with this and a bunch of other stuff I’ve got going on, I’m slightly annoyed that I’ve properly found my reading mojo again right at this time. A combination of being between writing books (not entirely, but the WIP is not at the stage yet where it’s taking over my every thought. Only about 50% of them), and picking up the combination of books to read that  I needed.

Yes, folks – this is a sneaky I-took-four-paragraphs-to-get-to-it, read-these-books-but-it’s-definitely-not-a-review blog entry! Hey, they happen occasionally. You know this. You thought it was going to be a World Mental Health Day entry didn’t you? Admit it. Okay – here’s my contribution: sometimes you don’t have to talk about this stuff just because it’s an Official Day. You don’t have to read everyone else’s tips on good MH practice and self-care, because sometimes it isn’t what you need. Sometimes you need to mute the phrase Mental Health and all the words that come with it that make your heart hurt, and turn off Twitter, and curl up with a book instead. /end WMHD message.

My reading mojo snuck up on me a bit – I didn’t really properly notice it was gone until it came back. I found two Hilary McKay books in Oxfam: Saffy’s Angel, which I’ve heard a lot of people talk about but never read, and one of the sequels to The Exiles, which is a book that me and my sisters quote at each other as shorthand to getting the giggles (‘What’s thruppence anyway? Stop poking me with them!’ and ‘She blew at me!’). We had one battered copy that made the rounds between us over and over again. Anyway. That was a lovely way to ease the mojo back in.

Then I was hugely nostalgic and I pulled out a couple of old Kate Atkinson books because I Lurve Her. And then I accidentally fell into Waterstones and used my food money up and in the process opened the reading floodgates to their widest possible position.

Maz Evans’s glorious Who Let The Gods Out? gave me my first inkling that I had been missing the mojo. I started reading it, and then stood in the kitchen reading it, turning the kettle on over and over again for tea that I didn’t get around to making because I was reading. Sat on the bed laughing with one shoe on, one shoe off for a while, still laughing and reading. 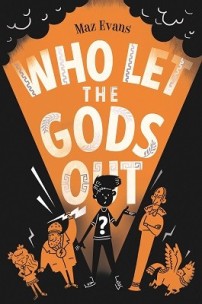 I took a break to message my sister and ask if Nephew 1 had read it. I wanted to send it to him, but the canny boy already has a copy because good reading taste runs in the family. Then I went back to reading it, hunched over uncomfortably on the sofa because I got caught up too quickly to remember to get comfortable. The phone did not distract me. Nor did the internet or Netflix, and I sort of resurfaced at the end with a feeling I hadn’t had since I was a lot younger, before the adult world and its worries really kicked in. That feeling of having completely been in another familiar-but-not world, this one crammed with Gods and and Constellations and Villians and jokes and darkness, and loving it and missing the characters – and it not at any point feeling like work, or like reading because I ought to. Oh my gosh. Like eating a favourite childhood meal and it tasting as good as you remember. So I will be reading it again, and then adding it to my stack for Book Buddy purposes. And also getting all the sequels.

And then I picked up Sarah Perry’s Melmoth, which I haven’t finished yet, but which I have had to pause because it’s doing my head in in the best way. I’ve been looking forward to it for months – Twitter is a killer for readers: books I would have stumbled across and bought in paperback, I am instead clamouring for and then splashing out on the hardback that I can’t really afford so as to have the words Immediately. I was going to launch straight into the other MG book I bought alongside WLTGO – The Wizards of Once, since you ask – but as I’m going to see Perry talk at Durham Book Fest very soon, I thought I should get on and read. 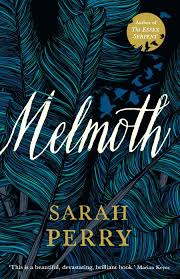 I made that decision with a slightly sinking feeling of the ‘reading because I have to’ coming back, so I was even slightly resentful as I started it. Also nervous because I’m a massive fan of Perry’s writing, and I was aware that there have been a couple of grim reviews. I like her writing in part because it’s so rich (even the sparser writing in After Me Comes The Flood) that it forces me, a horrible speed-reading word gobbler, to slow down and savour the words. It took me ages to get past the first few pages of Essex Serpent because I kept rereading them because I was enjoying them. Anyway, one of the reviews laid into her writing style – they called it amateur – and I admit to being worried. But now I think that reviewer… well, it’s just not their kind of book. Maybe they don’t like Gothic tropes. Maybe they don’t like the language that fits the images being conjured. To me, it’s a book that knows its roots and writes them in beautifully, intertwined in the text in way that signposts the darkness and awe for me. Not every book is for every reader. It’s just a pity that those reviewers furnished with books that are Not Their Kind Of Thing can rip them to shreds in the national press, rather than putting their hand up and saying, ‘you know what? Give me a contemporary drama with a hint of romance’.

I love it, is what I’m longhand saying. I can’t say I’m enjoying it, because I read it with a sort of appropriately creeping dread in my stomach and heart. But I’m hooked on the way the reader is both pulled in and pushed out – witnessing the stories rather than part of them. And the prose is as lyrically wonderful as I hoped, and while I was reading on the train I was so absorbed that the ticket inspector couldn’t get my attention to give my ticket back. I usually write on the train and that hasn’t happened for the past two days because of this book (and we’re back to mild resentment).

When I stop reading it, it’s not the breathless ‘What world have I come from?’ feeling of WLTGO, because its effect is to actually place you more solidly and soberly in the real world. But in a good way. I’ve just started Part 2, and I’m not worried that the second half won’t live up to the first, not at all.

Where I’m tripping up and why I’ve had to pause is that some of the plot elements are uncomfortably close to home, and the discomfort is in the details  which are bright and sharp and impossible to ignore. I’ve dog-eared a couple of pages because I need to look things up – family history and family current – and it’s things that I avoid thinking about or asking partly because I doubt anyone knows the answers, but partly because I don’t really want to know. But this book makes you want to look up, and see, and admit. And confess? Maybe? In the real world, I mean. It’s walking confidently along the fine line between desire and dread. It’s also just a really good story.

So yep – standard thing of the reading mojo is that it comes hand in hand with the HAVE YOU READ THIS YET? loudspeaker. Anyway. Dinner time now. And I still need to write at least one word today (on my WIP, not here) to say I’ve ticked off another day of the #100DaysofWriting Challenge. Ta ra.

One thought on “Gods and The Wanderer”