I’ve been sitting on writing this review for a while, struggling to put into words how I feel about a book that I wish, with all my heart, had existed when I was a child. Six stars out of five, frankly. It’s been a while since a book hit me like this.

A feast for the senses and the soul, this life-affirming middle-grade novel, from Branford Boase-shortlisted author Katya Balen, follows October as she fights to find her place in the world beyond the woods where she has always lived.

A classic in the making for anyone who ever longed to be WILD.

October and her dad live in the woods. They sleep in the house Dad built for them and eat the food they grow in the vegetable patches. They know the trees and the rocks and the lake and stars like best friends. They read the books they buy in town again and again until the pages are soft and yellow – until next year’s town visit. They live in the woods and they are wild.

And that’s the way it is. 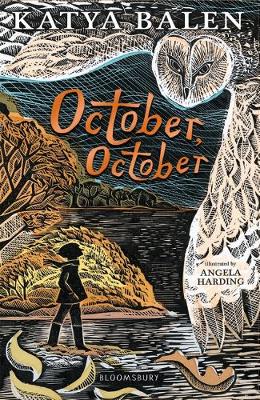 October, October is the story of a year in the life of 11-year-old October, who lives a wild and peaceful life in the woods with her father, keeping the woodland flourishing, working hard every day, growing vegetables, making do and mending, planting a tree for every birthday, climbing trees, tending the fire, and rescuing injured birds (a baby owl), October relishes every minute of her wild life – it is the life many of us in the rat race dream of – until it is interrupted by the return of ‘the woman who is [her] mother’. When October is forced to move from her beloved woods to London, she struggles to navigate a noisy world full of rules and too many people, her much-changed father, and a relationship with the woman who she feels acutely abandoned by – a woman who rejected that ‘dream’ life in the woods and, with it, October.

I hesitate to tell much more of the plot – that’s the bare bones, and those bones are woven over and around with golden threads of friendship, the nature of wildness, stories, treasures, misunderstandings and reconciliations. But what I loved about this book – what made me cry, often and drippily, as I was too engrossed to do much more than smear tears with an already soaked tissue – was the perfect depiction and understanding of childhood anger: that frustrating rage of being completely unable to control what is happening to and around, of not understanding why some rules and rules and no one explaining them, of not being listened too or understood, of when the world is so overwhelming but you can’t turn it off and so you howl, or cry, or smash things, or climb a tree, or run to the farthest field.

As an adult, I think we can all remember those feelings, perhaps some of us more acutely than others. As a child – I can’t imagine the relief of seeing yourself in these pages, and understood. It was a balm, to recognise my young self.

The story is told entirely from October’s point of view, beautifully observed (which is something so often said about books, but how do you describe that child’s voice that conjures things up so perfectly without ever being overwritten?) and Balen does an incredible job of balancing the information and understanding of what is going on. It’s possible, as the reader, to understand and feel for her parents even through October’s rage and hurt, and when October describes her woods, her shoreline, the library and classroom, and relays the interactions between her classmates as she struggles to understand how friendship grows and spreads, you are right there. Right there.

It’s a beautiful book not just in words, but also in images. I can’t review it without mentioning the beautiful cover by Angela Harding – and her owl pictures, which appear throughout the chapters: October’s owl, who is wild, but needs saving, somehow. It is too little to be wild alone.

I know October October has already won a prize for being a classic in children’s literature – and rightly so. It is a classic. It should be not required reading – I rather hope it never gets picked to drab scraps in a classroom – but the book that is slipped to every struggling and lost and angry child to help them find their way a little, and feel less alone.